PASSAIC — Nature may abhor a vacuum, but for redevelopers like Pomona, New York’s Stonegate, vacant and underused properties are pure manna.

Always on the lookout for an opportunity, the company pounced when 8 acres near the Passaic River, comprising three separate lots, became available, said Steven Gelbtuch, one of Stonegate’s two principals.

“We quickly recognized the area to be very opportunistic and extremely undervalued both in terms of its proximity to the city and ease of access to highways and transportation,” Gelbtuch said. “Noticing the factory buildings located right on the Passaic River, we immediately envisioned converting the area to luxury apartments with waterfront views.”

By mid-April, he said, the first of three projects, Two Market Street, should come to fruition, offering 63 apartments, many with unobstructed views of the Passaic River, southern Bergen County and, from the top floors, portions of the Manhattan skyline.

Once a laboratory for U.S. Rubber, the new apartment building will have amenities like rooftop dining, a gym and a common room as well as loft-style apartments with high ceilings, massive windows and breathtaking views. There will also be a two-level parking garage with 57 spaces.

“We saw something very unique about the area, which to us seemed like a golden opportunity,” Gelbtuch said.

He is not alone. Quadhir Cline, a real estate agent with Coldwell Banker in Clifton, said he plans to live there himself.

“I have lived across the river in Wallington for a few years and have followed the development of the building closely,” Cline said. “The team has made incredible progress on their vision and has truly paid great attention to detail and quality.”

Gelbtuch said the timing appears to be working, as there’s been an influx of apartment-hunters who have been priced out of New York City.

What attracts tenants are high-amenity properties at more affordable rents, he said.

He estimates that Stonegate has spent around $20 million to get the building, which will be called South Street Lofts, to this point.

Stonegate’s work crews are done with the heavy construction and are scrambling to finish the lighter construction. He figures it will take six to eight months to fully rent out the apartments.

While tenants are moving into Two Market Street, work will continue on the next project, 127 South St., which is adjacent and will consist of 52 units, mostly two-bedroom, and have 52 parking spaces.

The third project will involve converting an old factory site. It is still in the conceptual stage but will most likely consist of 300 apartments.

For all the properties, Stonegate has negotiated a 30-year tax abatement. Stonegate also has a few other projects in the city, including a series of row houses along River Road.

“We learned that Passaic is a very family-oriented area and attracts individuals and families looking for a good school system and housing that’s more affordable than neighboring Bergen County,” he said.

He also credited Passaic and in particular the mayor for being developer-friendly and limiting red tape.

Mayor Hector Lora said it has been his administration’s policy to get out of the way as much as possible. 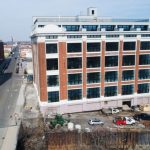