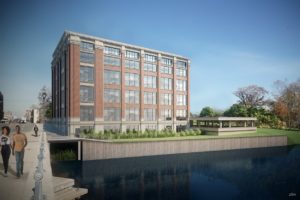 A rendering of the property at 2 Market Street, Passaic. – (STONEGATE REALTY LLC)

While Steven Gelbutch of development company StoneGate is no stranger to developing in often overlooked areas, his latest project in South Market Street, Passaic, is attempting to not only redefine the neighborhood, but the city’s riverside.

At a 70,000-square-foot abandoned industrial building next to the Dundee Canal on the Passaic River and less than a quarter of a mile from the thriving Wallington neighborhood, the developer is attempting to create a live-work environment.

“(The project) is actually across the street from a project called the Meridia, which also on the water of the Passaic River,” Gelbutch said. “It is a very successful development and it’s something we believe is going to drive the rents for us, in addition to the fact that it’s really close to (New York).

“All those factors really make us think that the area is very strong and up and coming. These types of properties actually have a beautiful, antique look, which is what we’re really going for. You have the expanse of the floor-to-ceiling windows and 20-foot ceilings, which look really nice.  And that type of industrial look, I think, is what is really selling today and that is what is attracting the young professionals.”

The development at 2 Market Street is a milestone for city of Passaic and three other parties involved in the project.

What was once an abandoned warehouse at 2 Market Street will now be where StoneGate delivers 63-loft-style units in addition to a 4,200-square-foot commercial space, where Gelbutch said a restaurant and a parking structure will be housed.

“The South Market Street Loft project represents a major breakthrough and paradigm shift for the City of Passaic,” Joseph Buga, project manager of The Passaic Enterprise Zone, said on behalf of Mayor Hector C. Lora. “First, it achieves our goal to convert an abundance of empty industrial space into healthy living space. Second, the City… negotiated to establish a river walk resulting in a new passive recreation and environmental restoration site that contributes to the overall walkability of Passaic.”

Gelbutch said the project is set to open in Fall 2019.

StoneGate is also hard at work in Bayonne, where it broke ground on a new development project last year, and on Gregory Street in Passaic, where it is rehabbing a commercial building from the 1930s.

“The newest and probably the most important piece of the puzzle (to 2 Market Street) is the rooftop access for the restaurant, which is something that will be a tremendous sell for the property,” Gelbutch said. “(2 Market Street) is in an area that is being redeveloped and there are other developments that are going up right now in the area and that is going to make it a really good attraction.”

While the redevelopment of 2 Market Street is being carried out by StoneGate, it was Noam Newman of Venture Equity Properties, according to StoneGate and the city of Passaic, who carried out a significant portion of the legwork to get the ball rolling on the development.

To get things started, Newman needed to consolidate three separate properties, including an abandoned railway line from private developers, a portion owned by the city of Passaic, and a portion owned by utility companies SUEZ and the North Jersey District Water Supply Commission.

“At the very minimum, my attempt was to leave the property in better shape than when I found it,” Newman said. “And I have to give a special thank you at all the hard-working people of the city and Suez, and at North Jersey District Water Commission. All of those people had to rely on my word and they had to believe me in following through with everything I requested and asked for.”

The industrial building itself, according to Venture Equity, sits adjacent to the Greenwood Lake Railway Line, which had not been privately owned since the 1860s, and a former distribution canal turned gravel lot, which was subject to a land lease between The City of Passaic and SUEZ in partnership with North District Water Supply Commission.

Newman consolidated all parts of the property and then carried out the necessary remediation and entitlements to bring the project to bear.

“The city of Passaic had been trying to revitalize that area for a long time. It became a redevelopment zone in 1997 and then it expanded its criteria in 2004,” he said. “Part of their mission was to create a river walk. And to create something that is walkable and livable and transit-oriented. They wanted to make it part of the neighborhood, not a building that is autonomous to the neighborhood.”

The project also benefited from being in a zone of redevelopment, which made it eligible for a PILOT agreement, in addition to the benefits of the city being designated an Urban Enterprise Zone.

Newman then worked with Cybul Cybul Wilhelm Architects and Langan Engineering to carry out the necessary architectural and engineering work throughout the whole development.

“The building itself is a gorgeous existing building, circa 1900,” Newman said. “It’s one of those classical industrial buildings that you see in any urban environment. It was an opportunity to create something special. And 70 percent of the inventory has a riverfront view.

“The huge windows are 20 feet wide and 12 feet high. The ceiling heights are 16 feet. Most of the inventory had the opportunity to include a mezzanine, so you have a mezzanine for sleeping and working and you have the downstairs where it is your living space. It is a beautiful building, the type of space is always desirable, especially these days and the millennial landscape, and how people look and interpret real estate. It’s just a beautiful product and a very easy product to get behind.”

Just 35 months after first working on the property, Newman had the property fully entitled and remediated. And in May 2017, he partnered with Kislak to sell the whole project to StoneGate.

When Noam sold the property, it was ready to be turned into a 63-loft-style apartment complex with 4,200 square feet of commercial space, a 57-unit, two story parking deck and a river walk.

“This is the poster-child for a public-private-partnership because there was so much public involved to get the private part of it,” Newman said.